Apelles painting Campaspe in the presence of Alexander 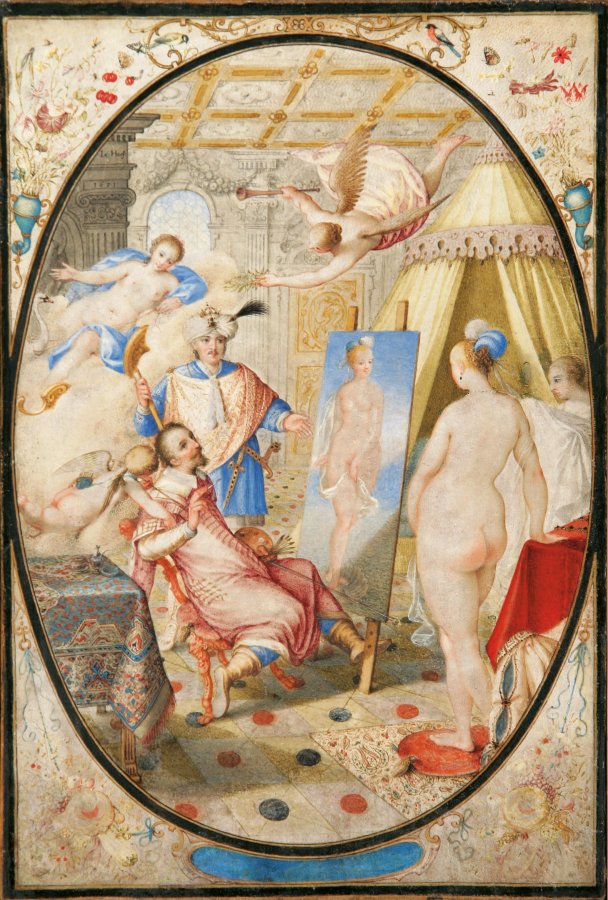 A true marvel of miniaturism, this illustration of the painter and his model is an absolute delight to the viewer. Sublimated by corners decorated with a multitude of small insects and other fruit, magnificently portrayed to the point of being almost palpable, this watercolour reveals the talent of an astonishing artist. Characteristic of our artist, these little medallions can be found in several works by Jacob Hoefnagel, including Winter (Pierpont Morgan Library, New York).

In a perfect oval highlighted in gold, revealing yet more the costly nature of this work, we discover a scene with a lively multitude of characters. The figure bedecked with ribbons is clearly the Emperor Alexander. The story goes that the latter commissioned Appelles, illustrated by the man holding the paintbrush, to paint the portrait of Campaspe, one of his most beautiful mistresses. The painter fell madly in love with her. Our watercolour shows the precise moment when Appelles starts to have feelings for Campaspe. This explains the presence of these little twirling cupids, ready to release their arrows, and that of Venus, the Goddess of Love.

The composition is similar to that of the painting Apelles and Campaspe (Kunsthistorisches Museum, Vienna) by Joos van Whighe (Brussels 1544 – Frankfurt 1603). There are strong similarities mainly concerning the characters. Joos van Whighe and Jacob Hoefnagel met in Frankfurt, which leads us to believe that our artist saw his friend’s work and drew inspiration from it to produce a highly admirable result. As was the custom at the time, an artist could paint the same painting several times to satisfy one or more patrons and sometimes, another artist would also draw inspiration from this painting thus meeting a demand for the same genre. It is quite probable that our watercolour belongs to this category. Just like Orphée et les animaux (Pierpont Morgan Library, New York), whose composition drew inspiration from a work by Jan Brueghel the Elder to meet the wishes of

Emperor Rodolf II, protector and main patron of our artist, the composition of our watercolour is an intentional copy of Apelles and Campaspe by Joos van Whighe to meet someone’s expectations.

Just like Actaeon surprising Diana bathing with her nymphs (watercolour, the Louvre, Cabinet of Drawings), painted by both Georg (the insects) and his son Jacob (the figures), our watercolour has a suggestion of eroticism. The sensual touch is mainly expressed in the way the nude is painted (for instance, through the use of the earring or the feather that decorates her hair); the woman has her back to the viewer but we can see her entire body through her full-length portrait that the painter of the scene reveals to us. Portrayed from behind, removing her clothes, the Diana in the watercolour at the Louvre is very similar to the nude model in our watercolour. The eroticism is all the more present since it is also suggested through the presence of the two cupids and the Goddess of Love, Venus, accompanied by one of her most recognisable attributes, the swan.

These protagonists evolve in a décor filled with a thousand wonders. Everything is scrupulously detailed. We can make out a fabulous room with a coffered ceiling, marble tiles and intricate architecture. Each detail, up to the motifs on the carpet, is rigorously and precisely studied and well-thought-out, giving a spectacular result. Moreover, on the table with a red tablecloth in the right-hand corner of the oval, we can observe a reference to the family of jewellers of Jacob Hoefnagel, with a magnificently detailed portrayal of necklaces whose details are wonderfully copied.

Following the study carried out by Dr. Thea Vignau-Wilberg, she suggests 1611 as the year of this watercolour’s execution, i.e. during the last period of activity of our artist for the Emperor Rodolf II. In fact, her study shows that the signature and date in the cartouche are probably later than the creation of the work, and that on the contrary, the cartouche should feature an allegorical text with the date she believes she can discern: “1611”.

This highly talented work shows Jacob Hoefnagel to be a great miniaturist, just like his father.